The Puffins came up with a huge array of topics this term. After a class vote they unanimously voted for the Titanic. Literacy/History/Geography, ICT, Maths and PSHE skills are flourishing through a variety of means. Such as diary accounts, newspaper announcements, ships through time, Continents, coordinates of the Atlantic positions of the ship, Area and Perimeter, comparing Oceans around the World. The children are currently building a display about the Titanic! 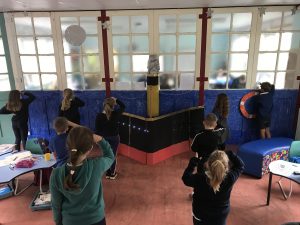 PE – Owls and Puffins are consolidating their Hockey skills, the hockey sticks are great for a socially distanced warm up. Our pupils are very keen athletes and hockey skills are part of a wide and varied Health and Wellbeing Curriculum. Well done everyone! 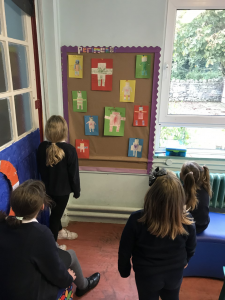 I enjoyed learning about perimeter. It was really fun making the robots, it was the best part of it! I liked making the 2d shapes to work out the perimeter. I have learnt that perimeter is outside the shape and area is inside the shape.  It makes me proud to see my work on display.
Shealeigh Thomas
Age 8